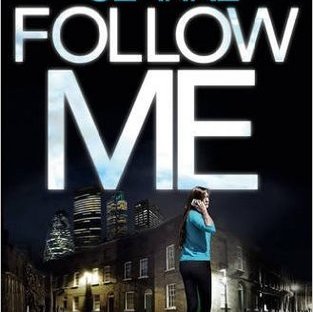 Nope, can’t be. This week is going to be awesome. You know how I know it? Because I am kicking it off with a review of one of this year’s favorite reads! Brace yourself, fangirling coming!

The ‘Hashtag Murderer’ posts chilling cryptic clues online, pointing to their next target. Taunting the police. Enthralling the press. Capturing the public’s imagination.

But this is no virtual threat.

As the number of his followers rises, so does the body count.

Eight years ago two young girls did something unforgivable. Now ambitious police officer Nasreen and investigative journalist Freddie are thrown together again in a desperate struggle to catch this cunning, fame-crazed killer. But can they stay one step ahead of him? And can they escape their own past?

Did it ever occur to you that this accepted-by-all expression is a bit creepy? I mean, I get happy when people follow me. What is wrong with me?! I remember the day Angela Clarke clicked on that little button and made my day. Of course, you don’t go around with hundreds or more people REALLY following you, but more often than not, those “followers” know more about you than the people behind you on the pavement when you’re walking the dogs.

Anyone can know where I am at a given time. What kind of pizza I like. The book I’m reading. The actor I stalk. Would you reveal all of this to strangers on the bus? Nope! But social media are part of our century, and to be honest, they take up way too much of my time. I take it for granted that I know how it works and I feel pretty safe there. I have a community, I send silly gifs, I react to others’ tweets. Well, this was before. It felt okay, second nature even, until our dear fabulously gifted Angela Clarke reminded me how dangerous life online is!

First line on the blurb and I got goosebumps! Not every is a cat lover, a bookworm or the President of the United States on Twitter! Murderers can hide under pseudonyms and make a real mess. Note: this novel is not a ‘do not use this tool of evil’ preacher. In the cleverest way, the author takes something we use as carelessly as our cars, a bottle of milk, or a camera, and insert a little hell in it. I could imagine myself checking the hashtag, I could see myself judging those replying nonsense to the weird and threatening tweets, I pictured the Twitter storm such events would bring. Angela Clarke makes sure even the less Twitter-friendly readers can understand what is at stake at every stage of the investigation, and most of all, she shines a bright light on trolls, their actions and the consequences they have. If this sounds like Chinese to you, grab the book, Angela gives you all the information you need to be immersed in this never-sleeping virtual world, and she taints it with crimson blood.

Blood which leaves the police puzzled and the public captivated. I was expecting a simple procedural, but there is nothing simple in Follow Me.

In this novel, I met one of the most colourful and interesting characters; Freddie, broke investigative journalist looking for her next article… who ends up knocking on the door of her past when her path crosses Nasreen’s… Old friends. A blessing and a curse! This book is the perfect example of it and I was as fascinated by the case as I was by the cop and the journalist’s friendship. The strong combination of a deadly plot and the scratching of old scars had me biting my nails. I loved how human and real Freddie was. We don’t see dead bodies every day! I have no idea how I’d react if it happened to me outside of one of my books. So, when she gets on the police’s side to catch the killer, having her reacting in what seemed to me to be the most natural way was so refreshing! I am used to cops making a comment or two about a body but this young woman hadn’t met death so close that she could smell before and the author added authenticity by not making her main character a know-it-all-can’t-be-dazed one-dimensional journalist.

Even Nasreen, ambitious and seemingly cold, had a heart beating under the cop uniform she wore. And while things focused on them, there was enough room for an entire police force to feel present and active throughout the novel, making it so real I felt I was watching TV at times…

The plot itself? SICK! A murderer always a step ahead, cops dealing with something they are not equipped for, a civilian thrown in the middle of corpses and a hunt for a psychopath… You know that feeling when you just go check something on Twitter and end up staying online for hours? Well, this book has the same effect!

I didn’t want to go back on Twitter when I finished reading, despite my need to scream how much I had adored reading it!!! I can’t talk about it without #spoilers so I will leave it to you to choose to be followed!

Follow Me was my first Angela Clarke novel. I am obsessed by her unique writing style! The next books in the series are already on my reading list! #unputdownable #favourite #omg #cantbreathe #need more #addictiveread

I’m The Sunday Times bestselling author of the Social Media Murder Series, a screenwriter, playwright and presenter. My debut crime thriller Follow Me was named Amazon’s Rising Star Debut of the Month January 2016, longlisted for the Crime Writer’s Association Dagger in the Library 2016, and shortlisted for the Dead Good Reader Page Turner Award 2016. Follow Me has been optioned for TV production. Watch Me the second instalment in the Social Media Murder Series went straight into the UK paperback chart at number 15 in January 2017. Trust Me the third in the Social Media Series published to tens of Amazon five star reviews in June 2017. My memoir Confessions of a Fashionista is an Amazon Fashion Chart bestseller.

The feature horror screenplay Lure, which I co-wrote with Cal Moriarty won the First Scene Screenplay Festival 2017, placed third in the Los Angeles Independent Film Festival 2017 and is a quarterfinalist in the First Blood Screenwriting Contest. My debut play The Legacy enjoyed a sell-out run to rave reviews at The Hope Theatre, Islington in June 2015. The Daily Mail Online called The Legacy ‘witty, insightful and powerful ★★★★★’. And West End Wilma described it as ‘A fantastic debut ★★★★’.

I guest appeared on CBS Reality’s real life crime series Written in Blood, which aired 24th September 2017 (in the U.K. Spring 2018 in the U.S.). I also appeared on the BBC Ouch’s Edinburgh Festival Stage in Tales of The Misunderstood, and hosted the book show Tales From Your Life on BBC 3 Counties in 2017. During 2015, I hosted and produced the current affairs radio show Outspoken on Radio Verulam. I also feature regularly as a panel guest on BBC 3 Counties, BBC Radio 4, and the BBC World Service, among others. I have given talks and masterclasses for many, including City University’s Crime Writing MA, Noirwich Crime Writing Festival, Camp Bestival, Panic! (in partnership with Create, the Barbican, Goldsmiths University and The Guardian), Meet a Mentor (in partnership with the Royal Society of Arts), Northwich Lit Fest, St Albans Lit Fest, BeaconLit, and the London College of Fashion. My journalist contributions include: The Guardian, Independent Magazine, The Daily Mail, Cosmopolitan, and Writing magazine. My satirical column Blonde’s Eye View appeared for a decade in The Wharf newspaper from 2003. (It is the longest running relationship I have in my life, apart from that with my parents). From 2009 to 2012 I wrote the popular anonymous column Confessions of a Fashionista for the Daily Mail Online. Deborah Arthurs, Femail Editor, the Daily Mail Online, says: ‘As an insider Angela gives a rare and fascinating insight into the murky world of the fashion industry.’

I also work as a manuscript reader for The Literary Consultancy, and private clients. In 2015 I was awarded the Young Stationers’ Prize for achievement and promise in writing and publishing (and then I got very drunk).

Oh, and I have a degenerative connective tissue disorder called Ehlers Danlos III, which does sometimes mess with my mobility. I have five different walking sticks ready for just such occasions. This has only fed my passionate belief we should encourage and support more marginalised voices into the creative industries, to truly reflect our diverse and rather fabulous society. I’m also very honoured to be a Fellow of the Royal Society of Arts.

25 thoughts on “#Signing Off: Follow Me by Angela Clarke @TheAngelaClarke #favouritealert #series @AvonBooksUK”