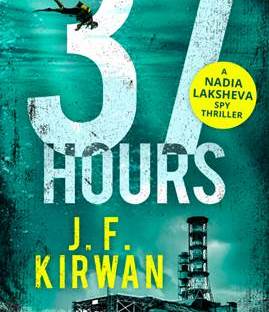 I am so excited to be part of this blog your! I really enjoyed J. F. Kirwan’s first book featuring Nadia, and I am a little emotional and proud of my friend Noelle for whom this tour is the last with Thick as Thieves! Congrats to you for creating this great tool for authors and congrats to Kate for managing the tours so well. It’s been a pleasure working with you, ladies!

But it’s time to go back to business! I have a great extract to share with you today! 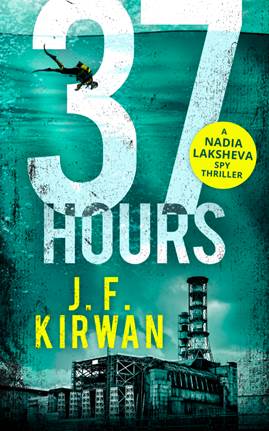 The only way to hunt down a killer is to become one.
Imprisoned by MI6 for two long years in solitary, Nadia suddenly finds herself free again. But there is a price to pay for her release. Another dangerous and near impossible mission – retrieve the Russian nuclear warhead stolen by her old nemesis, the deadliest of terrorists.
But he is always one step ahead, and soon Nadia finds herself at the front line of preventing London from disappearing into a cloud of ash. Only this time, she is ready to pull the trigger at any cost.
And with the clock counting down from 37 hours, time is running out…

The naval captain walked around Bransk and stood close to Nadia. He looked her up and
down, especially her shoulders. Then he spoke, his voice like smooth Scotch, no rocks.
‘I must touch you,’ he said to her, as if they were alone.

She laughed, incredulously. ‘We haven’t even been introduced.’

He smiled, and any indignation she felt at his directness evaporated. She felt her sister Katya’s eyes on her, though Bransk still faced the colonel.

‘Captain Sergei Petrovich Romanov. Submarine Commander, at your service.’ He made a
short bow, still not taking his eyes from hers. He pulled out a measuring tape, made a large loop, then passed it over her head to her shoulders. He measured their girth, then frowned. He released the tape.

‘Lift your arms straight up, please.’

‘Now tilt back your head as far as you can.’

He measured an oval space around her, encompassing her chest, her shoulders, and the back of her head. She wondered what exactly he was measuring her for.
He dropped to one knee and measured her hips, then got up and put the measuring tape
away. His eyes grew serious. Foreplay over, evidently.

‘Can you hold your breath for ninety seconds?’

‘I have to be sure. Lives will depend on it. Take three deep breaths.’

Bransk turned around. Everyone stared at her. She did as instructed. After the third in-breath, Sergei cupped his left hand behind her head, and pressed his right palm over her mouth. His finger and thumb sealed her nose. He glanced at his watch.
Bransk moved closer, made eye contact with her for the first time. Oddly, they were eyes
you could trust. And in those eyes she sensed a promise, that he would let no harm come to her. She heard the commandos’ rifles shift in his direction. Nobody in this room was stupid; everyone highly trained.
Sergei spoke, this time to Bransk.

‘Someone has taken command of a submarine. Mine. Ukrainian militia, so they say, though most in the Crimea are pretty happy to be part of the Motherland again. Nevertheless, the sub is in the Barents Sea, north of Murmansk. The sea state is not good, even though it’s technically the height of summer. I need a diver, a very slim one. Somebody who can enter my submarine via a torpedo tube with a 550-millimetre
diameter, one which can be opened from the outside.’

He checked his watch. Katya spoke.

‘You want her to enter without scuba gear? What if the torpedo room is flooded?’
‘It will be.’

Nadia was counting. Thirty seconds. So far, no problem. She thought about the torpedo
tube. A smooth steel coffin. She’d fit easily enough. Moving around would be another matter.

‘Blow the sub up,’ Katya said. ‘Or storm it from the main hatch.’

Nadia knew about submarines from her former training with Kadinsky. But Katya? Since
when did she know anything about subs? Was Bransk teaching her? In any case, the men
standing here now would have already considered both options, and they were probably still on the table as last resorts. Russia rarely met terrorist demands. Sergei continued.

‘There are twelve nuclear warheads aboard. We need to account for
every one of them.’

Forty-five seconds. Her stomach muscles contracted of their own accord. The urge to
inhale tugged at her. She swallowed twice, and the urge went away. A trick she’d learned
from her father. But it wouldn’t last long. Sergei continued.

‘These terrorists – they made ridiculous demands – hand back Sebastopol, withdraw from true Ukraine, bla bla bla. But we have reason to believe they – whoever they really are – are there to steal a warhead.’

One minute. Thirty seconds left. His hands were a vice. The gnawing in her lungs
resumed. She’d done ninety seconds with her father numerous times, but she was out of
practice. It hadn’t seemed relevant in her cell. Katya’s face appeared in front of her, worried.

‘This isn’t a game,’ Katya said to Sergei, her voice like acid.

‘On the contrary, it is a very real game, with very high stakes. But I don’t give people a
task unless I know they can execute it.’

He didn’t release her.

Her eyes watered. Her hands shot to his wrists, but they were iron, his black eyes on hers, large, searching, but also willing her to continue. Like her father.

Nadia’s body trembled. She tried not to squirm or claw at his hands, or even knee him in
the balls. But the gnawing feeling in her gut and lungs lashed at her in furious waves.

‘I need to see how people react under pressure, how they face the unexpected.’

Nadia understood. A test. She dropped her hands, stared back at him. Her body continued to tremble. Her vision grew blotchy, and the spasms in her diaphragm decreased. Her ears started to ring. She knew what came next.
Bransk spoke, his voice a distant boom above the ringing.

‘You’ve made your point. So has she.’

Sergei released her. She dropped into a crouch on the floor, gasping, coughing, sucking in
air, Katya’s arms around her.

The writing feels as sharp as in the first book, and I always appreciate meeting characters again. I need this book!

I am dying to read the rest of the story, aren’t you?? 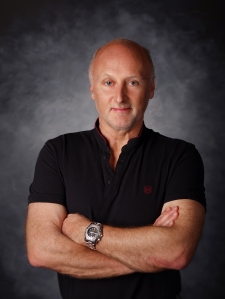 In his day job, J. F. Kirwan travels worldwide, working on aviation safety. He lives in Paris, where he first joined a fiction class – and became hooked! So when a back injury stopped him scuba diving for two years, he wrote a thriller about a young Russian woman, Nadia, where a lot of the action occurred in dangerously deep waters. It was the only way he could carry on diving! But as the story and characters grew, he realised it was not one book, but three…

Follow the rest of the blog tour for more information about 37 Hours and dive in!! 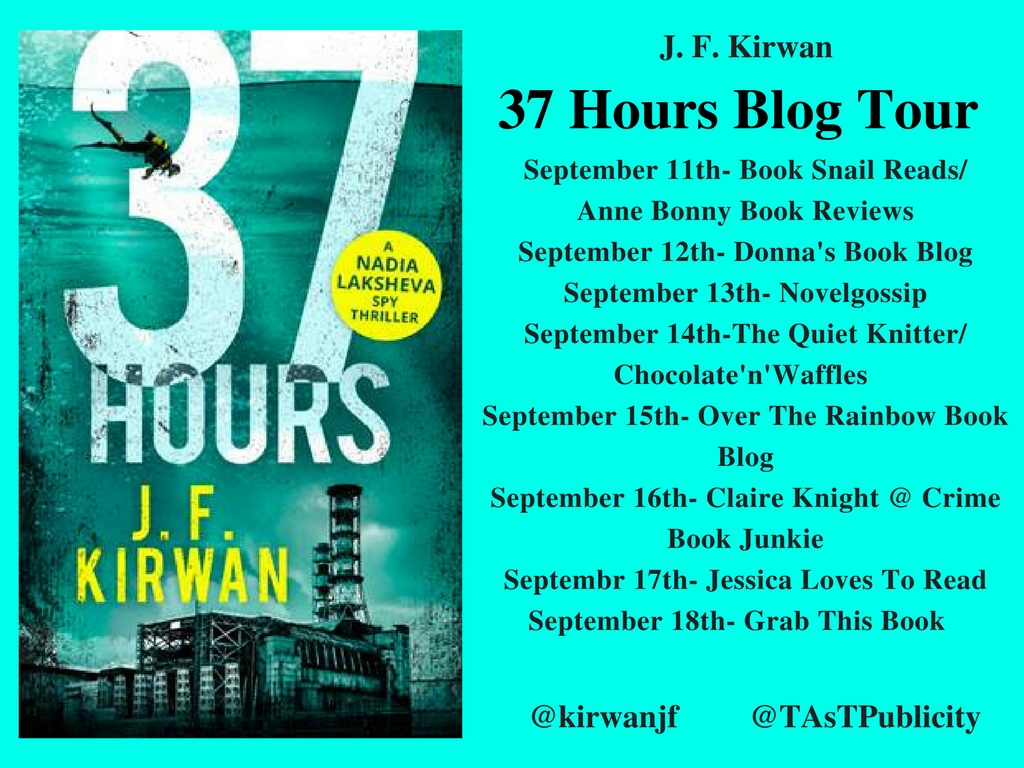